I expected to be writing the summary of our 2015 Senate session today, but instead I am trying to put into words my feelings about this senseless tragedy in Charleston and the killing of 9 South Carolinians.  One of those killed was my good friend, Senator Clementa Pinkney, with whom I have shared an office over the past three years.

I will never forget meeting Clem for the first time.  He walked into my office, welcomed me, and acted like he had known me forever.  When I heard his deep voice, it had such authority and yet was backed by such a gentle spirit.

As he looked at my pictures,  he noticed the one I have of the Buncombe Street UMC Senior High Boys basketball team I coached.  The photo was of our team praying with our opponents before the game.  On the wall in the picture was painted a large Methodist emblem.  When Clem saw that, he boomed out with a smile,  “You are Methodist too!”  It was an instant friendship.

Clem always had the biggest presence of anyone in the room, but he also had the smallest ego.  He was described in the Senate yesterday as a true “Southern Gentleman,” which he was in every way.  Between sharing our office and sitting next to him my first two years in the Senate chamber, we had many discussions.  We talked about our families, about how we both liked Allen Edmond shoes because they were great for big men like us, and about the issues facing our state.  We knew we disagreed with each other on some issues before we would start the discussion, but it was never to try to convince the other of how to vote or how to think.  It was truly just wanting to understand why we each thought the way we did. 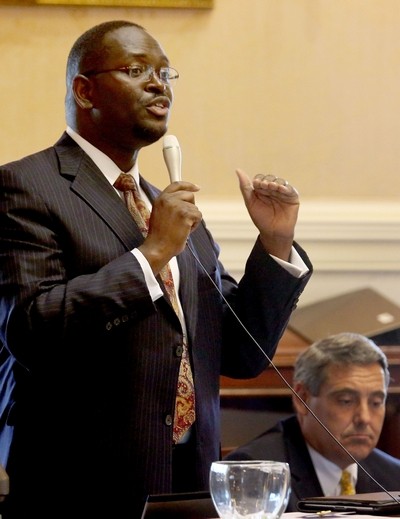 On Wednesday afternoon around 3:30, we spent some time together in my office.  We talked about family, and then he told me he loved the paintings I put in our lobby because they reminded him of his district and of home. We said our goodbyes as he left our office for a Finance Committee meeting before heading back to Charleston.

Just as most of you did, I woke up Thursday morning to the news of the shooting at the Mother Emmanuel AME Church in Charleston, and then I saw Clem’s picture on the screen as the news anchor reported that he and 8 others had been killed.  My heart ached first for the personal loss of a friend, and then for all of the families affected.

I got ready and went to the office as soon as possible because I knew our assistant, Ja’vell, would be there and I needed to be there too.  Thursday in the South Carolina Senate was as surreal a day as I have ever been a part of.  The Senators walked into session together around 10:00 and had our own memorial service for Senator Clementa Pinckney.  We recessed until 2:00 and went back in to do business the way the Senator from Jasper County would have wanted us to do.  We passed a supplemental bill with all egos aside and I felt a sense of unity that I had not felt in my first three years.  In addition, we passed a resolution to commission a portrait of Senator Pinckney, to be hung in the Senate chambers.

I believe the local Charleston leaders and the state leaders that have been involved since the beginning of this tragedy have shown the world that we are not a divided South Carolina.  I am not yet able to reflect on the “political solutions” to how such evil can go unnoticed or corrected in our society, but it may be because the real solutions are not political at all.   In the big picture, I don’t believe this is a white vs. black issue, but I do believe it is good vs. evil, and we will find the solutions when “good” people, regardless of color, stand together for what is right.

I keep coming back to Romans 8:28 – “And we know that in all things God works for the good of those who love him, who have been called according to his purpose.”  I know my friend Clem would tell me that something good will come of this, and I look forward to understanding what that is.